Iatrogenesis is the creation of a medical illness or death by the erroneous, harmful, or unintended results of medical treatment, including the use of medication.

Suspected for years by many, known secretly for years by researchers, drug companies and psychiatrists, and something I've seen firsthand time and time again -- Antidepressants are not only ineffective for most people, but can trigger Mania and set up people for life long Bipolar Disorder - even after the antidepressant is discontinued.

When I worked in psychiatric hospitals, one of the most common things I observed was flouridly manic or psychotic patients coming in after taking an antidepressant. Usually it was the first time they had been given an antidepressant, and often it was given to them unthinkingly, by their family doctor. General practitioners very often indiscriminately give antidepressant prescriptions to their depressed patients - without any careful evaluation - perhaps only within a 10 minute routine visit. Their lack of psychiatric experience actually doesn't account for all of it - since even psychiatrists - knowing the risks involved - still frequently prescribe antidepressants to their clients that may have a predisposition for Bipolar Disorder. Usually a psychiatrist in this case will also give another medication, such as a mood stabilizer (Lithium, Depakote, Lamictal) and/or an antipsychotic/anti-mania (such as Abilify, Risperidol, Zyprexa), thinkng that this will mitigate the risk of being on an antidepressant.

The long range research, however, shows that even in this case, antidepressants can predispose a person to more chronic depressive episodes and greatly increase their risk of evolving into a full blown Bipolar Disorder, with a chronic, life-long course - requiring further medications to try to "manage" the illness.

In medical lingo, this is called "Iatrogenic Illness" or "iatrogenesis," which means medically caused illness.

"Iatrogenic causes are the 3rd leading cause of death in America"
-Joseph Mercola, DO, www.mercola.com 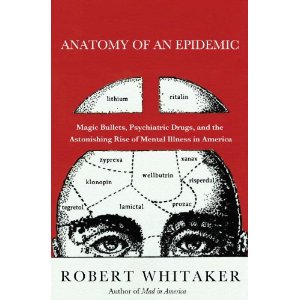 Anatomy of an Epidemic: A Must Read for every Therapist, Doctor and Client

This is an amazing and chilling book, telling the undeniable truth about psychiatric drugs and the wide-spread myths and disinformation created by drug companies in order to convince both the public and their doctors, that psychotropic drugs are effective and necessary to treat mental illness.

The old "chemical imbalance" marketing phrase is no longer able to survive under scrutiny. Not only is there little evidence of the therapeutic value of the long-term use of psychiatric drugs, there is faulty evidence of "chronic psychiatric illness" other than those chronic dependencies and neurological imbalances created by the long-term use of the drugs themselves.

Though these ideas may seem radical, this book draws evidence from major, mainstream published studies, including those by the National Institute of Mental Health, and also looks at the skyrocketing rates of psychiatric disability that have literally exploded over the past 30 years, along with the steady increase and popularity of psychiatric medications. This  book is a very lucid illustration of the prevalence of iatrogenesis as the root cause of psychiatric disorders.

Iatrogenesis of mental illness can often be avoided by educating yourself about alternative treatments, psychotherapy, and self-help techniques.